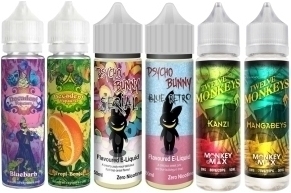 Well, finally, shortfill "shake and vape" e-liquids have arrived at Crème de Vape. They provide a cost-effective way for vapers to obtain larger bottles of e-liquid and avoid having to deal with all those little bottles.

Why has it taken so long for us to get them in?

Good question - I'll need to provide a bit of background to answer it.

We noticed shortly after the end of the TPD transition period in May 2017, retailers started offering large bottles of flavoured e-liquid without nicotine, with empty space for TPD compliant flavourless nicotine liquid to be added by the consumer because the TPD/TRPR regulations do not currently apply to liquids without nicotine. This has been seen by many as a positive development, however, it was unfortunate that so many producers rushed in to take advantage of this loophole with all manner of completely untested liquids.

We've spoken to many companies over the years who simply don’t care to test their product and seem not to be bothered at all about what their customers are ingesting. I can’t count the number of times that our request for test results has elicited a response along the lines of “no-one else has asked” or “you're the only one with a problem”. These new untested shortfills took us back to how the e-liquid industry used to be pre-TPD when we faced extreme difficulty getting any kind of information about product content from manufacturers, and we had to run our own testing because we refuse to stock potentially unsafe liquids.

The industry had been aware of the problem since Dr Farsalinos' 2014 report where he revealed he'd tested and found potentially harmful ingredients in a lot of e-liquids on the market. He tested for Diacetyl (2,3-Butanedione) and Acetyl Propionyl (2,3-Pentanedione) which are buttery/creamy flavoured chemicals which have been linked to permanent lung damage when inhaled. See his study report here. Consumers and manufacturers were starting to sit up and take notice.

We put our cards on the table some years ago (when we were known as Cloud9Vaping) when we publicly blogged about our long-standing e-liquid testing policy (see our blog post here). We stated we'd removed a range of e-liquid from sale shortly after commencing stocking it, because our testing revealed that contrary to the manufacturer's own assertions, the liquids contained very high levels of these potentially harmful ingredients. Many customers asked us which range we had removed from sale, so eventually we revealed the full story which lead to a huge debacle much of which was publicly played out. The manufacturer then threatened us with legal action for revealing information that they already knew about, but had concealed from retailers and consumers.

Gradually, the industry started to listen and vaping trade and consumer associations also started to recommend avoidance of liquids with these ingredients. Manufacturers started to actually recognise the problem and many began to take steps to deal with it and reformulate their liquids.

When the TPD/TRPR arrived, it mandated emissions testing and full ingredient disclosure, along with toxicology reporting for every single ingredient present. It also completely disallowed certain ingredients including the two I’ve mentioned above, which was a great step forward even though many of the other measures in the TPD have been ill-advised. See the TPD UK ingredient guidance. We thought it would finally rid the market of all poor quality liquids including those made with inappropriate ingredients that shouldn’t be inhaled – however that has not been the case as many producers of zero nicotine liquids have made no effort to perform any testing or comply with the banned ingredient list

The four ranges of shortfills we now stock have all been tested in exactly the same way as TPD compliant e-liquids, and none of them contain any of ingredients banned by the TPD, with the exception of Blackberry Crumble by Dinner Lady which contains a trace amount of naturally occurring (unavoidable) Diacetyl which is below the AFNOR recommended maximum level.

It’s possible that the unregulated shortfill market will be shut down at some point in the future when the regulators take notice and close this loophole. We expect the authorities to mandate that they be tested in exactly the same way as any other e-liquid and we would welcome this change. We only have to hope that they don’t put the 10ml limit on these liquids as well – if they do, it will be entirely because of those who tried to avoid testing and are happy to supply unknown substances for unsuspecting consumers to ingest.

All SvoeMesto items 10% off with coupon code SM10